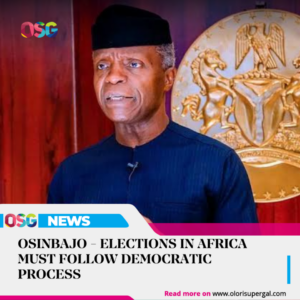 The Vice-President, Professor Yemi Osinbajo, has called on Africans to continue to make the extra effort in ensuring that elections in the continent go through the democratic process and remain transparent and fair.

Osinbajo said this on Monday, 20th September when the President-elect of Sao Tome and Principe, Carlos Vila Nova paid him a courtesy visit at the Presidential Villa.

The Senior Special Assistant to the Vice President on Media and Publicity, Laolu Akande, disclosed this in a statement titled ‘Elections in Africa must follow democratic process–Osinbajo’.

On 18th July 2021, elections were held in Sao Tome to replace President Evaristo Carvalho, whose tenure expired on September 3, 2021.

Based on constitutional provisions, an outright winner did not emerge from the polls and a run-off led to the emergence of Vila Nova, who would be inaugurated on October 2, 2021.

According to the Vice President “there is no question at all that for those of us in Africa, we must make the extra effort to ensure that the democratic process is very transparent. It is such a pleasure to see that that was what took place in your country which led to your election.”

He reassured Vila Nova of Nigeria’s support to ensure that his tenure is as comfortable and effective as possible as partners and friends.

In his remarks, President-elect Vila Nova expressed appreciation to President Muhammadu Buhari for supporting Sao Tome and also thanked the Vice President for his attention, stating that Nigeria is a “friendly country” and the relationship between both countries dates back many years.

In attendance at the meeting were the Minister of State for Foreign Affairs, Zubairu Dada, and a member of the Sao Tome and Principe’s cabinet, Americo de Oliveira Ramos.

CBN – All Businesses Must Accept New ...