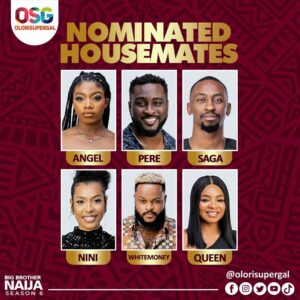 Six housemates have been put up for possible eviction in week nine of the biggest reality TV show.

Angel, Pere, Saga, Nini, WhiteMoney, and Queen are up for possible eviction this week.

Following the twist on the show on Monday, the six housemates were automatically put up for eviction after Emmanuel who won the Ultimate Veto Power game, named Liquorose as head of house and Cross her deputy.

He also has immunity from eviction and automatically has a place in the finals.