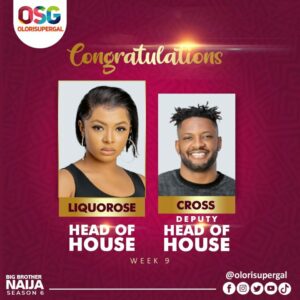 Liquorose has been named head of house for week nine and Cross her deputy in the Big Brother Naija season 6 reality TV show themed “Shine Ya Eye”.

They were named by Emmanuel after he won the Ultimate Veto Power. 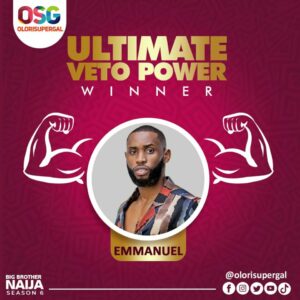 Biggie introduced a fresh twist on Monday after it cancelled the regular head of house competition and eviction nomination process by the housemates.

Instead, the housemates participated in a game tagged the Ultimate Veto Power game in which the housemate with the highest point will have the power to choose the head of house for the week, have immunity from eviction, and automatically have a place in the finals.

This is the second time Liquorose will act as head of house.