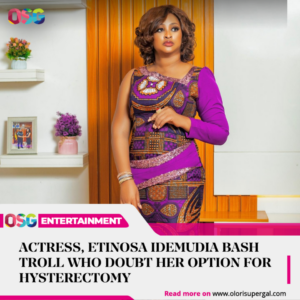 Nollywood actress Etinosa Idemudia has bashed a troll who doubt her pledge to Hysterectomy (a surgical procedure to remove the womb) after losing her dad.

Recall that the single mother of one announced the demise of her father on her Instagram page on Sunday, 19th September.
In her caption, she stated that the primary cause of death is because there is life, stating that her father would never have died if he was never born, and she would not have felt the excruciating pain because she would also not exist.

She further described the concept of life as a cycle of pain and misery, knowing fully well she will watch her family die one day, and they will also do so for her too.
She also said that she will not welcome any offspring again to the game of life where the final destination becomes death.

She wrote; “The major cause of death is life itself. Dad would never have died if he was never born and I too would never have been born. It hurts so bad. Also hurts to know that the only way to protect my children from death is not to bring them to life in the first place. For the first time in my life, I have seen a pain that even tequila cannot cure.

“A greater pain in the future. Knowing that either I will watch my other family members die as time goes on or they will watch me die. The only definite thing in life. Is this what you a call life?

“Who started this weird crazy cycle of pain and mystery called life?

“God? A loving God? What pleasure dies a loving man derives from this sick twisted game?

“Everyday we are alive, we are unknowingly playing a game of divine Russian roulette. Who is it going to hit next? When we make it through the day, we say we are “lucky” to be alive. Nah! This is mental!

“The real lucky ones are the beautiful ones who are not yet to born. You better remain unborn there’s nothing here on earth. Nothing! Just a facade of success and joy only to be sucked in countless unavoidable plagues, misery, and finally eviction- death. No matter the country you are or how rich you are LeeMao.

“I am as guilty as the people who brought me into this game cos I inadvertently have brought my innocent offspring into the same game.

“I didn’t know better. But from now one thing is sure. I am not helping any mystical being bring more people into his game. I refuse to procreate henceforth. Need to discuss my options for HYSTERECTOMY”.

However, a follower countered her decision of hysterectomy as a cruise on social media. She also said it is not every piece of advice people should listen to. She noted that the actress once advocated for celibacy before she gave birth to her girl child.

She wrote; “She don start again, na so she advocate for celibacy then she gave birth now again this hysterectomy talks before you know now, he don born twin join. Abeg mind who you listen to on social media… All na cruise … Meanwhile my condolence to your dad”.

The actress, however, replied and told her to reserve her sympathy for her family members.

She wrote; At “Franky Lexis save your condolences for your family members, the actress wrote”.