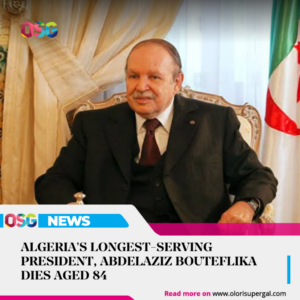 The former president of Algeria, Abdelaziz Bouteflika, has died after a long illness at the age of 84. He led the country for almost two decades 1999 to 2019, and was also a dominant figure in Algerian politics for six decades.

Born to Algerian parents in Oujda, Morocco on 2 March 1937, Bouteflika became known for his intelligence from a very young age.

In his first year of high school, the Moroccan royal palace called his parents to congratulate the family on Bouteflika’s outstanding academic performance.

A witty and sharp-tongued aide, Bouteflika so impressed the chief of staff of Algeria’s border army, Houari Boumediene, that he was named chief secretary until Algerian independence in 1962. Boumediene later became Algeria’s second President, after Ahmed Ben Bella.

When Boumediene and Ben Bella grasped control of Algeria in the summer that year, Bouteflika was named minister of youth and sport – he was only 25 years old.

A year later, in 1963, he became the world’s youngest minister of foreign affairs, a record that still stands.

During his 16 years as the nation’s chief diplomat, Bouteflika embraced “third-worldism”, leading newly independent African nations towards non-alignment in the Cold War.

Boumediene and Bouteflika played pivotal roles in earning Algeria its nickname “the Mecca of revolutionaries”.

Throughout the 1960s and 1970s, Algeria housed and welcomed freedom fighters and separatists from around the world, including Che Guevara. He is also credited with giving young Nelson Mandela his first military training.

Bouteflika was named president of the United Nations general assembly in 1974 and invited Palestinian leader Yasser Arafat to address the governing body in an unprecedented and ground-breaking move.

However, when President Houari Boumediene fell sick with a rare form of cancer and died in 1978, Bouteflika lost his power base and found himself isolated in the Algerian political arena.

He spent most of the next decade out of the spotlight, exiled in western Europe and the Arabian Gulf.

During this time, Bouteflika was also condemned for embezzling funds from Algeria’s foreign affairs department.

By the late 1980s, Algeria was in turmoil due to rampant youth unemployment and corruption blighting the country’s economy. Riots became commonplace.

Algeria’s third leader, President Chadli Bendjedid, responded to the unrest by putting an end to single-party rule in Algeria. But when the Islamist party, Front Islamique du Salut (FIS), gathered momentum in legislative elections, the military leadership interrupted the democratic process, plunging the nation into a bloody civil war.

After a decade of massacres, a panicked and desperate military elite insisted Bouteflika take the presidency, a post he believed he should have been offered after Boumediene’s passing in the late 1970s.

Sensing the 1999 presidential elections were rigged, all other candidates withdrew from the race.

Just five months after taking office, Bouteflika rammed through a referendum on national reconciliation, granting amnesty to thousands of Islamists and members of armed militias.

After winning a second term in 2004, he merged power within the military and intelligence services.

In 2008 he initiated a change in Algeria’s constitution which removed the two-term limit for presidents, a move that was ratified by both houses of parliament.

The last two terms of Bouteflika’s reign were marked with health problems and corruption scandals linked to unscrupulous businessmen.

In 2013 he suffered a stroke that severely debilitated his motor functions, and thereafter used a wheelchair.

Bouteflika’s final public appearance was in 2017 when he inaugurated a metro station and the newly renovated Ketchaoua mosque in Algiers.

Despite his physical handicaps, the Bouteflika campaign announced his intention to run for a fifth term in February 2019. He was 81 years old.

The announcement sparked protests across the country which snowballed into full-blown nationwide weekly demonstrations, the likes of which Algeria had never seen before.

The primary demand of the Hirak, as the movement would later be named, was Bouteflika abandoning his campaign to run for president again, and an overhaul of the political system.

After initially vowing to postpone elections and step down within a year, Bouteflika was forced to resign on 2 April 2019.

State television ran images of the then 83-year-old statesman handing a resignation letter to the president of the senate and subsequent interim head of state, Abdelkader Bensalah.

That would be the last time most Algerians saw the man who held the presidency for 20 years.

Bouteflika spent the rest of his days in a medicalised residence in a suburb of Algiers.

He is likely to be laid to rest in the presidents’ lot of Algiers’ distinguished El Alia Cemetery alongside other former Algerian leaders.

Comedian Bovi, Celebrate His Wife On Her ...