CSOs – Nigeria’s Next President Must Be A Nationalist

CSOs – Nigeria’s Next President Must Be A Nationalist 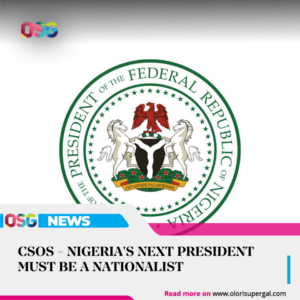 Civil society groups under the aegis of Coalition of Civil Society for Good Governance, have advised Nigerians to ensure that a nationalist succeeds President Muhammadu Buhari.

Abdulmajeed Dahiru, one of the promoters of the group, stated this during a roundtable, with the theme: “Correcting mistakes of leadership gap and expectations of the next President”, which was organised by Next President Project, in Abuja, on Thursday.

He noted that what Nigeria requires at this point in its history is a leader who is nationalistic and can rise above ethnic or religious bigotry.

Dahiru further said top political positions should also be rotated between the North and South, especially at a time the country was going through existential challenges.

He said, “As 2023 draws closer, we require a leader that is ready to rise above primordial sentiments of ethnicity and religion in his conduct to be able to unite Nigerians towards reaching our promised goals.

“Until Nigeria transforms from just a country of micro-ethic nationalities into a united nation, the country will not make progress. We must align ourselves with candidates that had displayed sufficient nationalistic credentials that is enough to move Nigeria forward.”

Convener of the Next President Project, Jacob Okpanachi, said the lapses in leadership in the country had resulted in a lack of economic and political intelligence.