Albert Einstein Refused To Learn How To Drive

Albert Einstein Refused To Learn How To Drive. 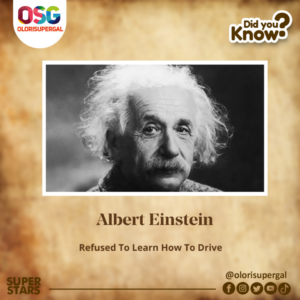 Here are twenty-five facts about the scientific legend, Albert Einstein

At birth, Einstein startled his mother as he had an abnormally big head; As time went on it shrank to normal size.

Compared to an average brain, Einstein’s Parietal lobe (the part concerned with handling sensory information) was a whopping 15% larger than normal.

Einstein loved the violin, claiming if he wasn’t a scientist he would be a musician as he lives, thinks, and sees his life in music. Einstein’s violin was named Lina.

Einstein, like all amazing people, had some quirks. He never wore socks as he deemed them useless.

Einstein paid his wife Mileva his entire prize money from his Nobel Prize, a staggering $32,250 which was vastly more than a professor’s salary back then.

Einstein’s second wife, Elsa, was his first cousin, and her middle name was Einstein.

Einstein received the 1921 Physics Nobel Prize for the discovery of the law of photoelectric effect and his work with Theoretical Physics.

Einstein’s first marriage to the mother of his child, Mileva Maric, lasted 16 years and had a contract outlining terms and conditions including the receipt of 3 meals a day to his room.

He was born on March 14, 1879, in Ulm, Württemberg, Germany. He was classed as a German, Austrian, American, and Swiss, and even stateless throughout his life.

A depressed parrot was the focus of Einstein’s interest during the scientists ’70s. He told it jokes to try and make it less depressed.

Early in his life, he evaluated patents for electromagnetic devices in a patent office.

Einstein completed his doctoral thesis at the University of Zurich and was awarded a Ph.D. on April 30, 1905.

Einstein had a useless memory; he often forgot names, faces, and dates.

A document focusing on the scientists association with pacifists and socialists was collated by the FBI in 1933; it stood a whopping 1,427 pages high.

A former director of the Federal Bureau of Investigation, Edgar Hoover, tried to keep Einstein out of USA but was overruled by the U.S. State Department.

As Einstein neared the end of his life in 1952, he a
was given the opportunity to become president of Israel but turned the job down.

In New York – buried away in a safe box – lies Einstein’s eyeballs after they were given to Henry Adams; the scientist’s eye doctor.

Einstein’s wrinkles and eyes appeared in Star Wars after the make-up supervisor responsible for Yoda based the features on the visionary.

Einstein loved to smoke; he smoked a pipe and claimed that it helps calm and focus a man.

Einstein started tutoring youngsters around the turn of the century as his financial situation became so poor.

Einstein was the director of the Kaiser Wilhelm Institute for Physics for 20 years from 1913 to 1933.

Einstein Syndrome is the condition of delayed speech in those who are gifted. It was discovered by Dr. Thomas Sowell.

Einstein at age 15 had mastered calculus.