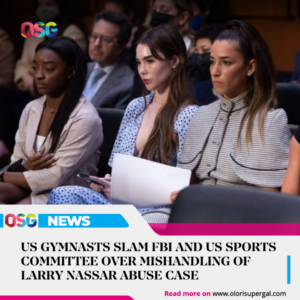 American artistic gymnast, Simone Biles offered emotional testimony at a US senate hearing into the Larry Nassar abuse scandal, an episode that rocked the world of gymnastics and involved some of the most famous young athletes in America.

Nassar, a former USA Gymnastics team doctor, is serving an effective life sentence after abusing dozens of athletes under his care. Biles and other Olympic gold medalists such as Aly Raisman and McKayla Maroney are among the survivors of the abuse. On 14th September, they appeared in front of a senate committee to give searing testimony at the hearing into the FBI’s failed 2015 investigation into the case.

Biles began her testimony with a quote from Nelson Mandela that: “There can be no keener revelation of a society’s soul than the way in which it treats its children.” She briefly had to pause after becoming overcome with emotion, before she continued.

“To be clear, I blame Larry Nassar and I also blame an entire system that enabled and perpetrated his abuse,” she said. “USA Gymnastics  and the United States, Olympic and Paralympic Committee knew that I was abused by their official team doctor long before I was ever made aware of their knowledge.”

The FBI is accused of failing to properly investigate allegations that Nassar was abusing athletes in his care. “Children suffered needlessly because multiple agents in multiple offices at the FBI neglected to share the Nassar allegations with their law enforcement counterparts at state and local agencies,” Republican Senator Chuck Grassley said in prepared remarks before Tuesday’s hearing.

Biles, widely regarded as the greatest gymnast of all time, withdrew from several events at this summer’s Olympics to maintain her mental health. She acknowledged that the legacy of Nassar’s abuse had affected her.

She said “The scars of this horrific abuse continue to live with all of us … I worked incredibly hard to make sure that my presence could help maintain a connection between the failures [around the Nassar case] and the competition at Tokyo 2020.

“That has proven to be an exceptionally difficult burden for me to carry, particularly when required to travel to Tokyo without the support of any of my family. I am a strong individual and I will persevere, but I never should have been left alone to suffer the abuse of Larry Nassar. And the only reason I did, was because of the failures that lie at the heart of the abuse that you are now asked to investigate.”

The 24-year-old added that she fears similar cases could arise if proper action is not taken. She said, “Nassar is where he belongs. Those who enabled him deserve to be held accountable. If they are not, I am convinced that this will continue to happen to others across Olympic sports”.

Meanwhile, Maroney and Raisman described how the FBI had failed to investigate their complaints against Nassar properly.

“After telling my entire story of abuse to the FBI in the summer of 2015, not only did the FBI not report my abuse, but when they eventually documented my report, 17 months later, they made entirely false claims about what I said,” Maroney testified. “They chose to fabricate. They chose to lie about what I said and protect a serial child molester rather than protect not only me but countless others.”

A US Justice Department investigation found that Nassar was able to abuse up to 70 athletes between the time the FBI first learned of the allegations and September 2016 when he was fired by his main employer, Michigan State University, after a police report was filed against him.

Raisman said that it was not just the FBI that had failed her. “My reports of abuse were not only buried by [USA Gymnastics and the US Olympic and Paralympic Committee] but they were also mishandled by federal law enforcement officers who failed to follow their most basic duties.”

Raisman described how Nassar’s abuse continues to affect her. She said “I don’t think people realize how much it affects us, how much the PTSD, how much the trauma impacts us … There are times where I feel like I forget what I’m saying. I feel like my mind isn’t working. I feel like I have no energy at all. I’m 27 years old and my 80-year-old grandfather has more energy than I do”.

FBI Director Christopher Wray appeared at the hearing and admitted his agency had failed the survivors of Nassar’s abuse. He said, “I want to be crystal clear: The actions and inaction of the FBI employees detailed in this report are totally unacceptable”.

W Jay Abbott, the FBI agent in charge of the initial Nassar investigation, retired in 2018 and was not disciplined over his handling of the case. The US Department of Justice inspector general Michael Horowitz said that Abbott had given false information during the investigation.

“It is troubling to me to see that an FBI agent who lied, broke the law, knew he was breaking the law – and nothing happens,” Vermont Senator Patrick Leahy said during the hearing, his voice rising in anger. “I understand the procedure but it bothers me greatly that failures by the FBI field office in Indianapolis delayed the start of the investigation of Larry Nassar’s widespread sexual assaults of over 100 victims. And everybody, I don’t care where they are on the political spectrum or anything else, had to be torn apart listening to the testimony of these victims this morning.”

USA Gymnastics has announced a plan to pay a $215m (£164m) settlement to the athletes abused by Nassar. In February, Li Li Leung, the chief executive of USA Gymnastics, told CBS the organisation recognizes “how deeply we have broken the trust of our athletes and community, and are working hard to build that trust back”.