Man Accused Of Cheating With Omah Lay’s Girlfriend Defends Her

Man Accused of Cheating With Omah Lay’s Girlfriend Defends Her 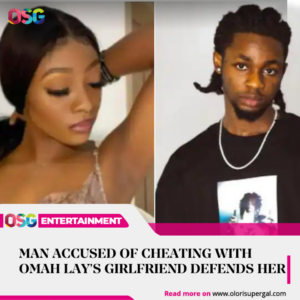 The alleged breakup between Nigerian singer, Omah Lay, and his girlfriend, Gloria Eberechi has continued to generate mixed reactions on social media.

This comes after Ramson Chima, the man she allegedly cheated with broke his silence. Recall that reports made rounds that Omah Lay and Gloria parted ways after a video of Chima and Gloria went viral.

Sharing his side of the story, Chima explained that Gloria has been his very good friend for over six years.

He also said people close to them were aware of their friendship, including her boyfriend. He also noted that she has done nothing and people should let her be.

“I and Gloria Eberechi are just friends.

“She’s legit one of the realest friends I have. We’ve been friends for over 6 years.

“Everyone close knows this, including her boyfriend. Nobody’s cheating on anyone here.

“She’s done nothing so y’all should let her be please”.