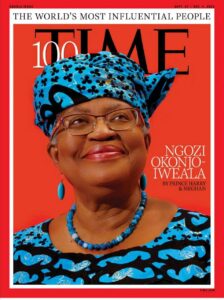 Nigeria’s former minister, Dr. Ngozi Okonjo-Iweala, has been named by American news magazine, Time, as one of the 100 most influential people in the world.

Okonjo-Iweala, who is currently the Director-General of the World Trade Organisation (WTO), was named alongside world leaders like United States President, Joe Biden, and Chinese President, Xi Jinping, on Time’s 15th September publication.

She is the only Nigerian named in the magazine in 2021.

After the publication released its list, she tweeted; “Honored and privileged to be on the cover of Time Magazine and to be recognized as one of the Worlds most influential leaders! Profound thanks to the Duke and Duchess of Sussex for their kind words. All Glory to God”.

In an appraisal penned by Prince Harry and Meghan, they applauded Okonjo-Iweala for her role in campaigning for equitable vaccine access across the world.