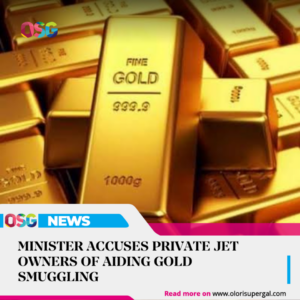 The Minister of State for Mines and Steel Development, Dr. Uche Ogah, has accused some private jets owners of abetting illegal mining and smuggling of gold out of the country.

Ogah, stated this on Tuesday, 14th September, during an investigative hearing on the $9 billion annual loss to illegal mining and smuggling of gold, organised by the Senate Committee on Solid Minerals, Mines, Steel Development and Metallurgy.

The minister who called for capital punishment for offenders noted that Gold smuggling in Nigeria is often done using private jets, the very reason why private jets ownership and operations, need to be streamlined in the country.

He further said that gold smuggling and illegal mining which are robbing the country of billions of dollars on yearly basis thrive due to series of factors like connivance of security agencies with the offenders, host communities collaboration, low level of application of technology, and negative mindsets of Nigerians towards Nigeria.

He however added that the menace can be tackled proactively through the establishment of mines police, special court or tribunals to try offenders, adequate funding for the ministry, and positive mindsets of Nigerians towards Nigeria.

Speaking in the same vein, a member of the Committee, Senator Francis Fadahunsi, alleged that the Central Bank of Nigeria (CBN), has made smuggling an easy vocation in Nigeria.

Fadahunsi accused the apex bank of aiding smuggling through its lopsided and selective policy on making foreign exchange available to Nigerians.

“Categories of Nigerians at the top – from political office holders, politicians, traditional rulers, top security officials, etc, are involved in gold smuggling and illegal mining in one way or the other.

“The poor ones are doing it on behalf of the big ones.”

Chairman of the Committee, Senator Tanko Al-Makura, said for a thorough investigation of the menace and the way forward, heads of relevant government agencies would be invited to appear before the committee.