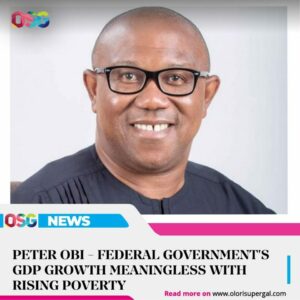 A former governor of Anambra State, Peter Obi, has criticized the latest National Bureau of Statistics report which stated that the country’s economy has recorded a five percent growth to Gross Domestic Product growth.

Obi stated this on Sunday night, 12th September when he featured on a Channels Television programme, ‘Politics Today’.

He precisely said rather than celebrating growth to GDP, which had no impact on the citizenry, the Federal Government should stop borrowing for consumption and face investment.

He further said the fact that the Federal Government had been borrowing money and spending it on consumption had not made the NBS report make a significant impact in the lives of an average Nigerian.

Obi pointed out that the Federal Government should concentrate on the small and medium enterprises, education as well as target its citizens in the Diaspora if it wanted to make a significant impact in the lives of its citizenry.

“The type of growth I want to see is the one that will pull Nigerians out of poverty by making the people to have disposable income and be able to feed themselves.

“We need the type of growth that will educate our children, provide primary health care for all the communities. We don’t need growth based on speculations that government officials are celebrating all over the places.”

Obi asserted that growth to GDP could only be celebrated in a country when people are happy with their disposable income and be able to take good care of themselves and members of their families.

He said, “The biggest engine for economic growth is the micro, small, medium enterprises. That is the practice all over the World.

“That engine today is not being supported in Nigeria. Nigeria has a total of 40 million SMEs but there is not a properly articulated fiscal and monetary policy to support the critical sector.

“The entire loan to private sector on Nigeria today is about N30trn. Less than N1.5trn is going to the SMEs. This is less than five percent of the entire loan. This means Nigeria is not supporting its engine that can enhance the nation’s economic growth.

“The SMEs are the biggest employer of labour in many advanced countries of the world. We need fiscal monetary policies that would invest in this engine of growth in order to create jobs.”

BBNAIJA SEASON 6: JayPaul and Jackie B ...