Wanted To Own Me And Have Something Official”

BBNAIJA 2021: Ex-housemate Boma “Queen Wanted To Own Me And Have Something Official” 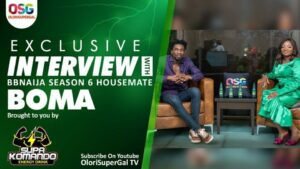 In his interview with Sergeant Olori, Boma noted that it has been an emotional rollercoaster for him. He said he has been getting a lot of death threats on social media, however, it has reduced compared to when he was in the house. He said two people were hospitalized in his team because they broke down emotionally.

About the misunderstanding he had with Queen, Angel, and Maria, Boma said that he didn’t mean to call Angel a mental health patient, noting that it was the heat of the moment. He said for Maria, she disrespected him with her statement when she said he was making noise at bed time.

As for the misunderstanding with Queen, he noted that she was using her clingy emotions with male housemates to get attention and also win the hearts of viewers. He further noted that every time her name is mentioned for negative things, she tried to bring Angel and other housemates into it.

Speaking about Tega, he said whatever transpired between them was pure entertainment and nothing more. He said what they had in the house started and ended in the house.
As a professional actor, putting up the show was something he could do flawlessly, the difference is Biggie’s house was a reality show and not a movie.
He said Tega was a favourite in the house; she was like a girl’s guy.

Boma noted that he wasn’t sexually attracted to Tega. All the viewers saw was a pre-planned script which backfired because it was misinterpreted.

His reign as head of the house was something the housemates enjoyed and made reference to at all times. He said housemates didn’t like Pere’s reign because of some decisions.

Speaking positively, he said Pere is an emotional person behind the personality portrayed.

He considers Arin as a good friend, WhiteMoney, and Liquorose as his competition.

There is more to Boma than what was portrayed in the house. He spoke his truth on OlORISUPERGAL TV. A must-watch for every lover of Big Brother Naija reality tv show.

BBNAIJA SEASON 6: JayPaul and Jackie B ...