BBNAIJA 2021: Ex-housemate Peace – “I Was Very Flirtatious In The House”

BBNAIJA 2021: Ex-housemate Peace – “I Was Very Flirtatious In The House” 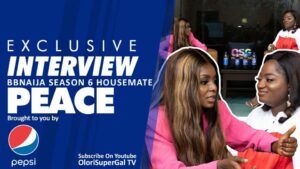 In her interview with Sergeant Olori, Peace talked about her reign as the first head of the house. She said it was an amazing time and she enjoined every bit of it.

As a feminist, she said she is not intimidated by the strength of a man or his physic. She is however happy the female housemates are leading.

Talking about why she cried when Arin and Maria were evicted, she said they are friends and she just wanted them around. However, she had to make herself under later that it’s a game and eviction her bound to happen.

She saw Liquorose as her biggest competition in the house. If allowed to go back into the house, she said she would make adjustments to the sleeping habit she developed.

Peace had things to say about general Pere’s reign as head of the house. Informative yet intriguing!

Nollywood, Bollywood, Hollywood, Sports and so much ...