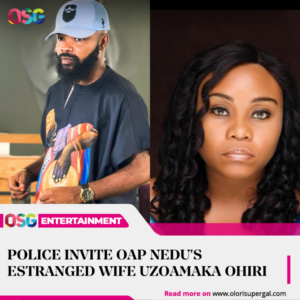 According to reports from The Punch, policemen attached to the State Criminal Investigation Department, Panti, visited her home in the Ajah area of Lagos State on Tuesday evening, but she was not at home.

However, they told the security guard to inform her to report to the SCID on Thursday.

Recall that on Saturday, 4th September 2021, Uzoamaka called out the Wazobia FM OAP over domestic violence.

In his response, the OAP said he is innocent of all the allegations leveled against him. He also revealed with evidence that he found out the son she had few months into their marriage was not his.

The estranged couple got married in 2013 but their marriage crashed in 2018.