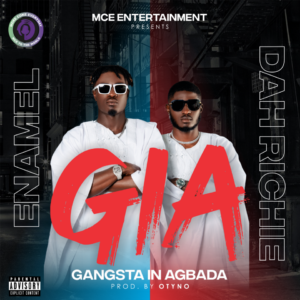 MCE Entertainment artists: Enamel and Dah Richie team up to release “Gangsta In Agbada (G.I.A)” – their new single. Stream here. The two artists partnered up for the release of their first single of the year, written by the duo and produced by top Afrobeats producer Otyno. “G.I.A” is distinct of Afro Trap genre, a swing sub-genre of Afrobeats which is coined from a fusion of Trap with diverse genres like Afro pop, Afro soul and Afro fusion. Enamel and Dah Richie both bring out Afro Trap effortlessly in their tracks.

From the title “Gangsta In Agbada”, gangsta is to portray their individualities in a fashionable way. Agbada is a type of attire in Nigeria mostly worn during special occasions and regularly by elite people such as politicians, tycoons and generally wealthy people. These terms inspired the song title to signify that they are stylish gangstas, and the song tells a story of their lifestyle and support for non-violence in any form.

More Coke Everyday Entertainment presents “G.I.A” as the duo’s first official collaborative single. This also marks Dah Richie’s first official single under the label while following Enamel’s previous single, “Gang” which landed in February 2020 to raving reviews. “G.I.A” is now setting the pace for a trailblazing exchange of talent between the artists.

Ahead of the release, MCE Entertainment label president, Helpline Giwa said, “Enamel and Dah Richie’s exchange on this song is amazing. It’s like they’re having a conversation and telling each other a story – all done very poetically. I respect Shakar El’s industrial expertise as the A&R on this project. And Otyno did a great job as well, you can’t miss the beat. There’s a huge difference between a song and a record, I believe G.I.A is a record.”

The duo is currently gearing up for the release of their individual singles and EPs slated for release soon. A special message to their fans, “We love you and can’t wait to turn up with beautiful people to enjoy wonderful cities, iconic locations, and also collaborate with amazing artists from Africa.”

ABOUT ENAMEL:
Enamel has been described as an artist on the ‘radar’ by GQ Africa, carving his rise with his smooth melodious tone and his amazingly vivid storytelling. His talent is highlighted by his ability to convert everyday life stories into infectious beats that become amazing songs. From chilling with his peers to appreciating African women and highlighting political issues that plague the continent, his diversity in musical topics inspires creativity. With the anticipation of his upcoming EP set for release by 2022, he aims to welcome the world into his furthest adventure with music, a love affair that professionally took off into 2019 but had been in the works for close to a decade.

ABOUT DAH RICHIE
Hailing from Ibadan, Dah Richie has his eyes on capturing the local and international market. As an artist that understands Afro-Pop’s ability to touch the world in places only a digital connection can, he is motivated to find the next sounds between the intricacy that Afro-Pop
and Trap can be offered as a sub-genre that has barely been charted. He sets the stage with his ability to maneuver the two genres passionately, but carefully as well. Aware of his musical prowess, he does not underplay his talent by owing his decision to pursue music to legends that he looks up to. He respects them, but defines his dreams as independent of their legacies, which is often not the case with new stars in the horizon.

ABOUT MORE COKE ENTERTAINMENT (MCE)
More Coke Entertainment was founded by the current Chief Executive Officer, Helpline Giwa. With headquarters in South Africa and Nigeria, MCE’s continent-wide reach aims for strong international growth. MCE believes it is leading the era of the “Afro Diversified Hustle” which can be described as their distinct music genre – a culture.

Afro Diversified as a sound mixes some of the biggest genres on the continent like Afrobeat, Trap, Hip-Hop and Amapiano to form a fresh diversified genre. As a school of thought, ADH realizes that Africa is in a unique position to take all the challenges that we are faced with and use the best of our different cultures and philosophies to solutions.