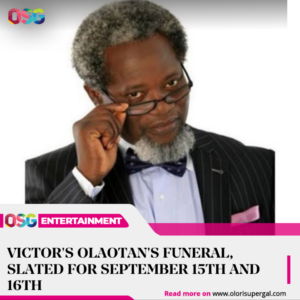 The funeral of late Nollywood veteran actor, Victor Olaotan, has been scheduled to take place on 15th, and 16th September in Lagos State

According to the obituary released by his family, a service of songs will hold at the RCCG, Fountain of Life parish in Ikeja, on Wednesday 15th, while his burial service will hold at the same church on Thursday, 16th September 2021.

He was best known for his role as Fred Ade-Williams in the popular TV series, Tinsel. He was bedridden for five years after he was involved in a ghastly accident.