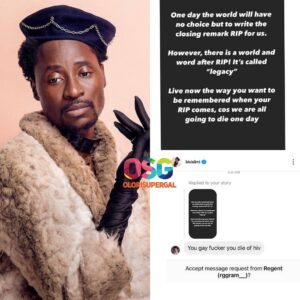 Nigerian gay activist, Bisi Alimi, has reacted to the hateful words he received from an Instagram user who replied to his story.

“One day the world will have no choice but to write the closing remake RIP for us.

“However, there is a world and word after RIP! It’s called “legacy”.

“Live now the way you want to be remembered when your RIP comes, cos we are all going to die one day”.

He went on to share a screenshot and picture of the person who replied to his story with; “you gay fuker you de of hiv”.

In his caption, he noted that he has received horrible replies since his last post about Annie Idibia’s marriage. However, this is the nicest he has seen so far.

He went on to ask those who send him hurtful messages what their mission in life is.

“I woke up to this message from this human in my dm. I personally think of all the most horrible messages I have received since my post about Annie and my reply to a question in my story, this is the nicest.

“The question is; to those of you, picking up your phones, opening Instagram, coming to my page, clicking the message icon to send hurtful, hateful messages, what really is your mission in this life?

“After the message do you get alert in your bank account or an extension to your life? You could use the time you are wasting on hate, to better your life, and speak positivity into your poverty but no, bitterness won’t let you be”.

“Las las, we will all eat breakfast”.

El Salvador Moves In The Adoption of ...