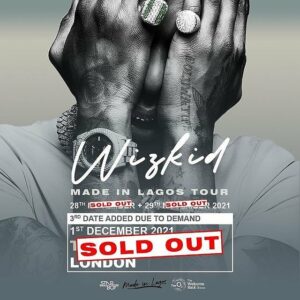 Grammy-winning Nigerian singer, Wizkid has sold out one more show for his Made In Lagos Tour at the O2 Arena in London, adding to his already two sold-out dates at the O2.

Wizkid, took to his Twitter page on 3rd September 2021 to make the announcement.

Recall that the superstar released his Made in Lagos album on 30th October 2020.

One of its tracks, Essence which features Nigerian singer Tems has since gained international recognition as different celebrities all over the world.

As of 31st August, Essence, became the most searched song on the music search platform, Shazam. It is also the top 10 of Billboard’s Hot R&B/Hip-Hop Songs chart with a 13-5 lift on the chart.