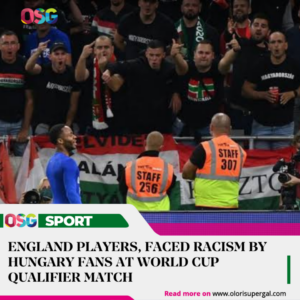 Several players were pelted with plastic cups and other objects, which Declan Rice and Jack Grealish used in turn to poke fun at Hungary fans by taking celebratory ‘drinks’ following England goals.

The Football Association has called on FIFA to investigate the chants which were aimed at Raheem Sterling and Jude Bellingham, and world football’s governing body is awaiting a report from officials who were present at the Puskas Arena before launching an investigation.

The tone was set at kick-off when England’s players were booed loudly as they took a knee to protest against racism.

Hungary’s players and their head coach Marco Rossi had asked supporters to respect England’s gesture before the match but the message went unheeded.

Hungary had already been requested to play two home matches behind closed doors, with a third game suspended, after being charged over racist and homophones chanting at Euro 2020.

But as Thursday’s match fell under FIFA’s jurisdiction, a full house was allowed into a match marred by bad fan behaviour.