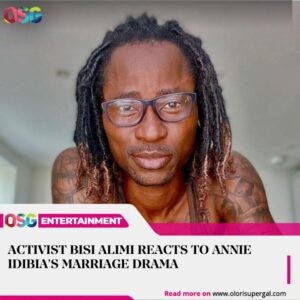 Nigerian gay activist, Bisi Alimi, has reacted to the marriage drama, between Nollywood actress, Annie Idibia and her husband Tuface.

Recall that Annie took to her Instagram stories to call out her husband over his affairs with his baby mamas.

Reacting, Alimi, took to his Instagram page to share his thoughts. He noted that women will never win if they don’t learn how to stand by each other in times like this.

“A woman stayed with her husband even when he was a community pr*ck.

“Now she has had enough because the man continues to disrespect his marriage, but no he is not the problem It is the woman who spoke out.

“Women in Nigeria will never win. Imagine if it was Annie that had different baby daddies, I’m sure we won’t be having this conversation”.