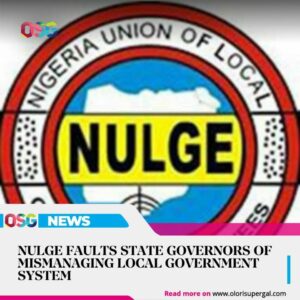 The National President, Nigeria Union of Local Government Employees, Alhaji Ambali Olatunji, has stated that the root of security and socio-economic challenges facing the country is traceable to the mismanagement of the local government system by state governors.

Olatunji, while calling for local government autonomy described the Joint Account Allocation Committee as a channel pipe for stealing money meant for the third tier of government.

He stated this while speaking during a prayer programme on Wednesday, 1st September 2021 organised by the Nigeria Union of Local Government Employees at the Abuja Municipal Area Council, to press home the agitation for council autonomy.

Olatunji said, “We need a politically free and financially dependent local government administration. The local government has been raped over time; it has witnessed systematic destruction as a result of misrule and stealing of local government funds, thereby militating against progressive development at the grassroots level.

“No wonder, as of today, we are bedevilled by insecurity and poverty. We are deprived and also encumbered by unemployment, homelessness just because we have a failing system in the local government.

“It was fostered on the local governments by state political actors led by the governors in this country. Monies meant for growth and development, and dividends of democracy were diverted.”

Olatunji further said it was time to fix the local government administration in the country. He noted that council elections should not be conducted by state electoral bodies.

He added that the polls conducted by the state agencies were not acceptable to Nigerians, describing the exercise as a charade.