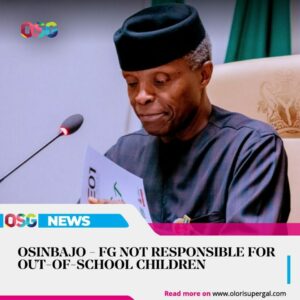 The Vice President, Yemi Osinbajo has clarified that the Federal Government is not the cause of most of the problems associated with the education sector in Nigeria.

The programme was jointly organized by the African Child Policy Forum, Women Arise for Change Initiative, and the Africa-Wide Movement for Children.

Osinbajo identified social and cultural prejudices as some of the critical problems militating against the girl child in Nigeria, stressing that despite efforts by the Federal Government to curtail the menace, states, and local governments also had roles to play.

He said, “We run a federal system, and questions of education, medical care are essential state matters. Primary education is state and local government matter. The Federal Government has only about 100 schools of the hundreds of thousands of schools.

Osinbajo advised victims of child abuse not to take it as the end of life, adding that examples abound of such victims that have shrugged it off to make it in life.

He also urged states yet to domesticate the Child Rights Act, and the Violence Against Persons (Prohibition) Act to do so.

At the event, President, WACI, Dr. Joe Okei-Odumakin, said Nigeria has the highest prevalence of child marriage in Africa.

The Executive Director, African Child Policy Forum (ACPF), Dr. Joan Nyanyuki, said it was important to recognize that despite concerted efforts, the challenges are fast outpacing efforts, hence the need to redouble efforts.

Meanwhile, Minister of Women Affairs and Social Development, Dame Pauline Tallen, described the dialogue as a clarion call on government as well as well-meaning individuals to support the girl child.