BBNAIJA SEASON 6: Fifteen Housemates Up For Eviction In Week Six

BBNAIJA SEASON 6: Fifteen Housemates Up For Eviction In Week Six 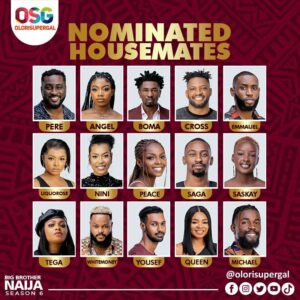 Fifteen housemates have been put up for eviction in week six of the Big Brother Naija season 6 reality TV show themed “SHINE YA EYE”.

Biggie announced the twist on Monday 30th August, a day after one of the wildcards was evicted alongside two other housemates.

Two heads of the house emerged after a tedious game and both of them are immune from eviction this week.

The housemates up for eviction are;

At least one of the housemates will exit the show during the live eviction show, on Sunday, 5th September 2021.