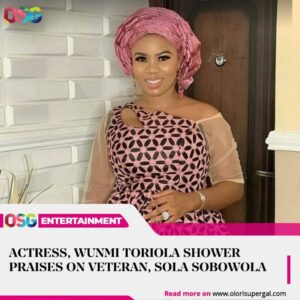 This comes following the release of the ‘King Of Boys‘ sequel which the veteran actress played a lead role. Recall that the movie was released on Friday, 27th August 2021.

Toriola, took to her Instagram page to post a picture of Shobowale and said described her as top-notch in the movie industry.

“You made my childhood worth it and you didn’t stop there, you are making adulthood more inspiring “You are a true thespian” You have always been an inspiration and a role model. The way you “kill” those roles “passionately”.

“Please allow me Famz her, I am a fan, I learn from you. I am so optimistic. Thank you for making people like us “learn” from you .. All hail the King Shola Sobowale”.