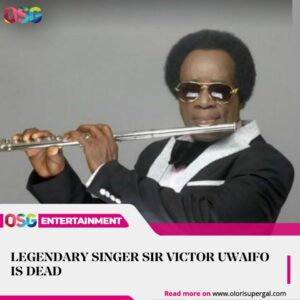 Nigerian legendary singer Sir Victor Uwaifo has died at the age of 80.

The music legend died on Saturday, 28th August 2021, according to The Nation.

He was born on 1st March 1941, in Benin City. He attended Western Boys High School in his hometown and later, St Gregory’s College, Obalende, Lagos.

He thereafter proceeded to Yaba College of Technology, Lagos from where he obtained a National Art Diploma with distinction.

He received a B.A Hons, First Class, Fine and Applied Arts from the University of Benin and a Masters Degree in Sculpting from the same university.

He also obtained a Ph.D in Architectural Sculpture from the same university where he has been a Professor until his death.

He served as Commissioner for Arts, Culture, and Tourism in Edo State between 2001 and 2003.

In 1996, he won the first gold disc in Africa for his song Joromi, released in 1965, and seven other gold discs in Guitar boy, Arabade, Ekassa series, and Akwete music.

He is the first professional musicians to be awarded the National Merit Honours of Member of the Order of the Niger (MON).