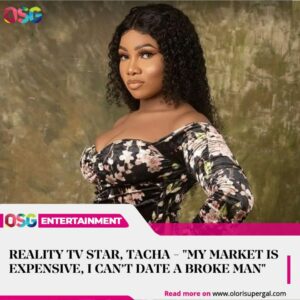 Former Big Brother Naija housemate, Anita Natacha Akide better known as Tacha has opened up about the kind of man she can be in a relationship with.

Tacha who is participating in an international show, ‘MTV: The Challenge’ made this known during an interview on TVC’s Your View”. She also revealed she is single and not in any relationship at the moment.

According to the the 25-year-old, her “market is expensive, deliberate and intentional”.

She said “I am so sorry, I can’t date a responsible but broke man. Everyone has his/her own spec so I will urge people to go for their spec. As for me, my market is expensive.”

Hitting on the topic or discussion about meeting a partner online, Tacha said it doesn’t matter whether she met a man online or offline.

“Well, I love to make virtual friends even though it is not advisable but most of my friends are people I met online. Don’t expect me to post my picture on social media saying I’m single and searching but I can indirectly shoot my shot. But, my man must be rich, hardworking, sweet and encouraging, God-fearing.”

Speaking about how she has been able to stay relevant despite her disqualification from the season of four of Big Brother Naija show, she said she is a workaholic.

“No one is bankrolling me. My business is funding me. When you do what you do, don’t do it for men. Do it for yourself. I mean, I have my own business even though, my man needs to have money to compliment me, I need to have mine too so that at the end of the day he won’t say he made me. I want to have my say too not to disrespect him. I want to be a self-made woman”.