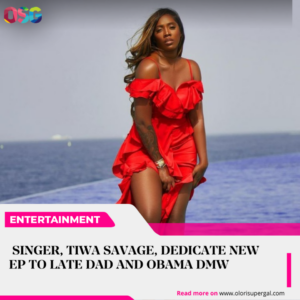 Nigerian singer, Tiwa Savage, has dedicated her newly released EP to her late father and her friend Habeeb.

The singer, took to her Instagram page, to express her joy. In one of her posts, she revealed to her fans that she broke free, put the music first, and created it without fear.
She also noted that she didn’t know what to expect, but wonderful reactions from her fans mean she can never go wrong, listening to her heart.

In her captions, she wrote;

“I AM LITERALLY CRYING RIGHT NOW.

“This is for my daddy and Habeeb. Wish you both were here to see this. Rest on”.

“I took a chance, I broke free, I put the music first, I created without fear. I didn’t know what to expect when I dropped this, but you all feeling this EP means I can never go wrong if I truly listen to my heart”.

Recall that the singer, lost her father on Monday, 19th July 2021. He was popularly known as Baba Savage.

Her friend, Obama DMW whose real name is Habeeb Uthman died on Wednesday, 29th June 2021, after complaining of breathing difficulty.