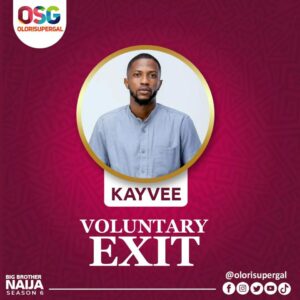 The head of the house, Pere, announced his withdrawal from the show on Monday afternoon, 16th August 2021.

There have been conversations between fellow housemates who alleged that he was behaving strangely.

The audience of the show, who has been reflecting on KayVee’s apparent struggles to adapt in the house, called on Biggie to look into the matter.

Biggie, however, took the right decision and arranged for KayVee to see a professional medical practitioner.

Recall that the 26-year-old Photographer and Cinematographer was among the four new housemates introduced to the show on 8th August 2021, during the live eviction show that saw Yerins, Niyi, and Beatrice leave the house.