BBNAIJA 2021: Ex-housemate Niyi Sees Pere As An Actor Who Doesn’t Care About Others

BBNAIJA 2021: Ex-housemate Niyi Sees Pere As An Actor Who Doesn’t Care About Others 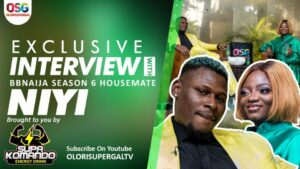 Adeniyi Lawal, better known as Niyi in the Big Brother Season 6, was the second housemate to be evicted from Biggie’s house.

In this interview with Sergeant Olori, Niyi, the only married male in this season, disclosed that he saw his eviction coming, having had a misunderstanding with one of the wildcards who were tasked with nominating housemates for eviction.

For him, the most intriguing aspect of the show was not being in charge of anything that has to do with his daily activities.

He further said Whitemoney’s strategy in the house shows love.

Sergeant Olori’s introduction was lit.
Click and subscribe on the youTube link below to watch the interview on OloriSuperGalTV, brought to you by SupaKomando Energy Drink