BBNaija Season 6: JMK Disclose She Chose Fame Over Her Career

BBNaija Season 6: JMK Disclose She Chose Fame Over Her Career

JMK, one of the newly introduced housemates has disclosed she chose to come for the reality show, instead of being called to the bar as a lawyer, after spending six years in school. 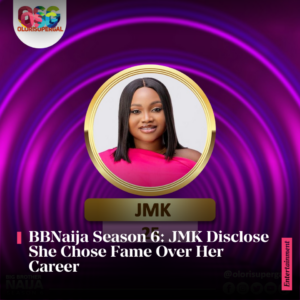 She disclosed this while having a chat with Angel.
She said after weighing her options, she realized the reality show would help her more than being a lawyer.

JMK however added that she could still be called to the bar after the show.

Recall that four new housemates – Michael, KayVee, JmK, and Queen were introduced into the house during the live eviction show on Sunday, 8 August 2021.