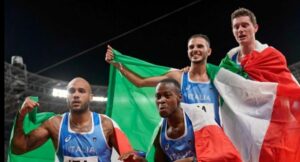 As the closing of the Tokyo Olympics Games draws near, Italy has produced a remarkable performance, to win the men’s 4×100 meters relay Olympic title on Friday for the first time in their history, with a national record of 37.50sec.

Britain’s men made up for a poor series of performances in the individual sprints by taking silver in 37.51sec while Canada won bronze in 37.70sec.