American Singer Kacey Musgraves Ponders On Her Album After Divorce

American Singer Kacey Musgraves Ponders On Her Album After Divorce 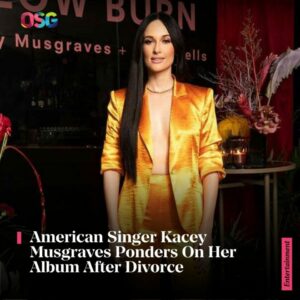 American singer and songwriter, Kacey Musgraves has disclosed how she feels about her Grammy-winning album, ‘Golden Hour’ after divorcing her husband, Ruston Kelly, who was an inspiration to the magical love songs in the album.

In an interview with Cracks Magazine, Kacey said “she’s “grappling” with the fact that she’s “always going to have to sing Golden Hour for the rest of my life”.

She further said “I could choose to be an asshole to my fans and not sing it, but I don’t wanna do that to people who come dying to hear a song that they love.

“It’s about finding a balance between giving someone the show that they want and respecting my heart too… and what I’m handling.

“Not that it won’t be difficult. I may have to disassociate a little bit when I’m singing the Golden Hour stuff.”

She also explained that she will find a new meaning to the song.

Kacey and her ex-husband announced their separation in a joint statement in July.

According to the duo who met in 2016 at a songwriter’s showcase, the love they have for each other goes far beyond the relationship they have shared as husband and wife. It is a soul connection that can never be erased.