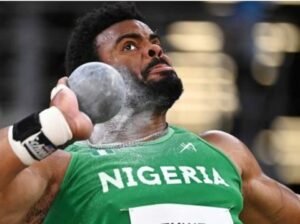 Nigeria’s Chukwuebuka Enekwechi has crashed out in the men’s shot put final at the ongoing Tokyo 2020 Olympics on Thursday.

The athlete came 12th after throwing 19.74m on his third attempt. On his first attempt, he fouled and on his second, he’s thrown 18.87m.

Enekwechi made history on Tuesday when he became the first Nigerian to qualify for the final of the shot put event.

In a video that went viral, the athlete, was seen washing the jersey for his shot put, hours before the game.

The caption read; “when you made the Olympics final, but you only have one Jersey”.