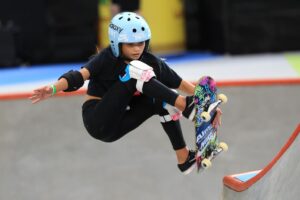 After falling in her first two runs of the final, the teenager, nailed her last attempt with a score of 56.47 to finish behind Japanese pair Sakura Yosozumi, 19, and Kokona Hiraki, 12.

Her achievement is more remarkable for the fractured skull and broken bones she suffered during a horrific fall in training last year.

She posted a video clip of the fall on her Instagram page and wrote; “I’m excited to come back even stronger and even tougher. My heart wants to go so hard right now.”

Brown, who was born in Miyazaki, Japan, to a Japanese mother and British father, competed at the US Open in 2016 at the age of eight and was first elected to compete for Great Britain in 2018.