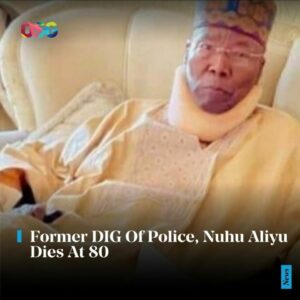 The deceased, who was also a former senator representing Niger North and one-time senate chairman on Security, died on Wednesday 4th August, in Kaduna State, after a brief illness at the age of 80.

According to a family source, the deceased has been battling with health issues in recent times.

“Today the will of Allah has prevailed upon his soul. May Allah forgive his shortcomings.”

Reacting to the news, Niger State Government, described the deceased as a great man of courage who was dedicated to Nigeria.

In a statement by the Secretary to Niger State Government, Alhaji Ahmed Ibrahim, he said “the state has lost a man of immeasurable value, he added that his advice would be greatly missed.

“The patriotic tendencies and excellent handling of legislative duties concerning the welfare of people and the nation demonstrated by Senator Nuhu Aliyu were worthy of emulation.

“But we must take solace in the fact that from God we all come and to Him we shall all return”.