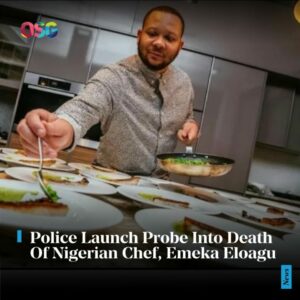 The Federal Capital Territory Police spokesperson, Mariam Yusuf, has confirmed his death.
She told journalists that the Police are investigating the case to ascertain the exact cause death.

According to claims by some of his friends, Eloagu, was allegedly stabbed to death by assailants who gained access into his home.

Another claimed the chef was allegedly killed by two persons who he granted access to his apartment. They allegedly stripped him naked, tied him up, and then strangled him.

Until his death, the 35-year-old, was the Creative Director of Helenes Food Company, based in Abuja, which have hosted celebrities and politicians.

He graduated from Le Cordon Bleu Paris with a Grande Diplomé in cuisine and patisserie.

He was reputed for combining French cooking methods with Nigerian cuisines.