Nigerian veteran singer and songwriter, Onyeka Onwenu has reacted to the controversy surrounding the burial of Obi Cubana’s mother that became the center of attraction on social media. 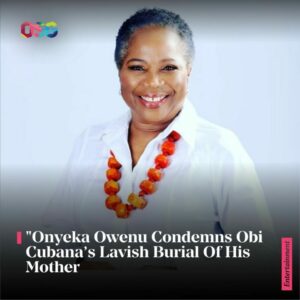 Onyeka, condemned the display of wealth and explained that the timing was not right since the majority of Nigerians had been hit hard with poverty.

She further explained that Ndigbo does not condone the conspicuous display of wealth, without investigating to know the source to ascertain whether it was gained through ill-gotten means or legal means.

The former X Factor series judge, added that the culture of verifying the source of wealth changed at the end of the Nigeria/Biafra conflict so people have had the liberty to do what they wish.

Ms Onwenu wrote: “I condemn it all. It does not reflect the Igbo culture that I grew up in.

Ndigbo would not condone the conspicuous display of wealth. If you were found doing that, your close and extended family, your community would send a delegation to you, to ask about the source of the wealth you are throwing about. You would be ostracised if you have no convincing evidence of legitimate work. All that changed at the end of the Nigeria/Biafra conflict. Ndigbo were deprived of their money, their oil wells and towns excised from Imo and Abia States, their properties termed ‘abandoned’ and taken from them.

They were forced to rebuild with no help and no compensation. It therefore became every person to themselves. Having money meant that you could get things done and like every other Nigeria society, our priorities were turned upside down. People no longer asked how and where you got your money. The point was that you had it. Our values may have been eroded but we have to fight back to regain them, to ensure our survival as the decent and hardworking people that we truly are.”

“However, what I find equally deplorable in this whole debate, is the strenuous effort to tag the people of the South-East, Ndigbo, with all manner of negative attributes because Obi Cubana is Igbo. This is not surprising. It has always been the case. When there is unexplainable hatred, some people are bound to give a dog a bad name, so that they can justify hanging it.”