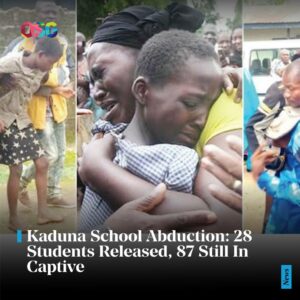 Recall that 121 students were abducted, when bandits invaded the school on 5th July.

However, there was panic among the parents of the remaining students as the Nigerian Baptist Convention said 87 schoolchildren were still with the bandits.

The bandits demanded a ransom of N60m, but N50m was raised by the school and some parents who contributed what they could afford.

Contrary to the claim of those who said the bandits were given N50m, the President of the NBC, Rev Israel Akanji, in an interview with journalists on Sunday said no ransom was paid by the church.

It was earlier reported that NBC had contacted some of its chapters to raise the ransom demanded by the bandits.

Most of the 28 students, who regained their freedom looked pale, while others had rashes all over their bodies.

While addressing the parents, the Proprietor of the school, who is also the President of the Kaduna Baptist Conference, Rev. Ishaya Jangado, said the bandits stated that they would release the abducted students in batches.