Dieter Brummer, the Australian actor best known for his role as ‘Shane Parrish’ on TV soap Home And Away between 1992 and 1996, has died at the age of 45. 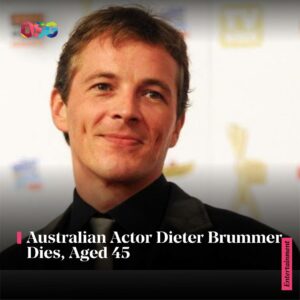 The actor, was found dead at a house in Sydney on Saturday by New South Wales police responding to a welfare call.

However, his death is not being treated as suspicious.

In a statement on Monday, Brummer’s family said ‘We lost our handsome, talented, funny, complicated and beloved Dieter.

“He has left a massive hole in our lives and our world will never be the same.

“Our thoughts go out to all of you who knew him, loved him, or worked with him over the years.

Brummer was enormously popular on Home and Away during the 1990s, playing the love interest of Melissa George’s Angel Brooks.

He joined Home and Away aged 15 and became a fan favourite; He left the long-running soap when his character was written out after dying from septicaemia in 1996.

Brummer continued to act in TV roles, including true-crime drama Underbelly, Winners and Losers and a 26-episode stint at rival soap, Neighbours, as Capt. Troy Miller, in 2011.

In an interview in 2010, the actor disclosed he took up a career as a high-rise window cleaner after departing Home and Away to experience life out of the limelight.