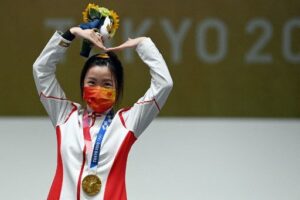 Chinese Shooter, Yang Quian wins the First Gold in the Tokyo Olympic Games 2021, in a final competition of the women’s 10m air rifle between Russian, Anastasiia Galashina who lost to her in the finals.

Galashiels, won the Silver medal with an effort to win the final Games, heading into the last shot but stumbled. While Yang won the gold medal effortlessly and calmly.

When interviewed, she said “Inside, I’m not as calm as you saw.

“Throughout the competition, I kept adjusting my mentality, trying to calm my nerves. I think I’m good at that”.

It has been all celebration for her and fans when she was announced the winner for the game.

Police Apprehend Couple for Self Kidnap in ...