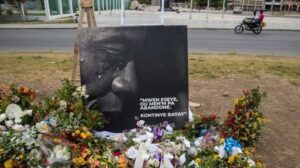 Two weeks after the assassination of Haiti’s President, Jovenel Moise, mourners are set off to offer thier final farewell under tight security on Friday.

The late president, who was 53, when he was shot dead in his home in the early hours of 7th July, is set to be interred in Cap-Haïtien, the main city in his native northern region.

According to the official program, the funeral is due to begin in the morning and last for several hours, with large screens set up for mourners to follow the event.

Moise’s widow, Martine, is expected to be joined
at the event by the late president’s relatives, cabinet members, current and former senior government officials, as well as religious figures and representatives of trade unions and civil society groups.