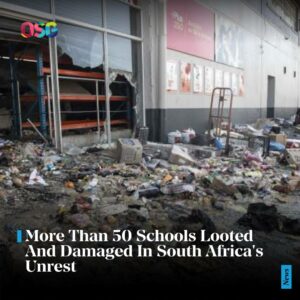 Following the unrest that gripped South Africa, more than 50 schools have been damaged, torched and looted, in KwaZulu-Natal province, Zuma’s home town.

He said some of the schools were looted, torched and damaged. However, they have not been able to quantify the extent of the damage and the number of schools at this point in time.

The National Teachers’ Organisation of South Africa (Naptosa) said it was sickened by images of a school in Kwazulu-Natal burned to the ground, with the reason apparently being that people were looking for food.

Naptosa noted that the constitution determined that “a child’s best interests are of paramount importance in every matter concerning the child”.

It also said the acts were tantamount to treason and had psychological impact on the pupils and teachers of the affected schools.