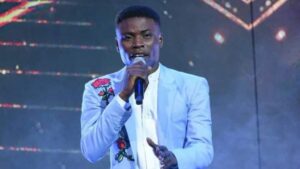 The winner, of the just concluded Season 6 Nigerian Idol, Kingdom, has been awarded a scholarship, and has also been appointed as Youth Ambassador in Bayelsa State Government.

The state Governor, Douye Diri made the announcement on Friday, when he received the winner at the Government House in Yenagoa.

The governor said that government would bear the responsibility of Kingdom’s education at the Federal University, Otuoke and till he gets to his Masters Degree level.

He also disclosed that Kingdom, has been appointed as an ambassador of the youths of Bayelsa State.

in his statement, the governor said “Let me use this opportunity to call on youths of Bayelsa State to see Mr. Timi Kingdom Kroseide as a role model; as one who out of hard work and the grace of God has brought honour to the state. I am sure that putting yourselves in legitimate careers, you would bring honour not only to yourselves but also to your state and country”.