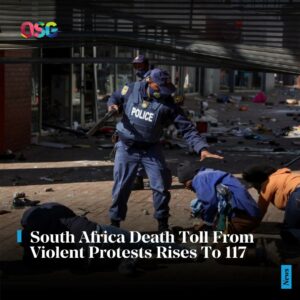 The death toll from violent protests going on in South African, in Gauteng and KwaZulu-Natal has risen to 117.

The was made know on Thursday, 15th July, by the country’s Acting Minister in Presidency Khumbudzo Ntshavheni.

Ntshavheni, noted that 725 people have been arrested in Gauteng and 1,347 in KwaZulu-Natal.

The nations protest was sparked by the judgement of the Constitutional Court in the country, after it sentenced the former president, Jacob Zuma to 15 months in jail, for refusing to appear before a corruption probe.