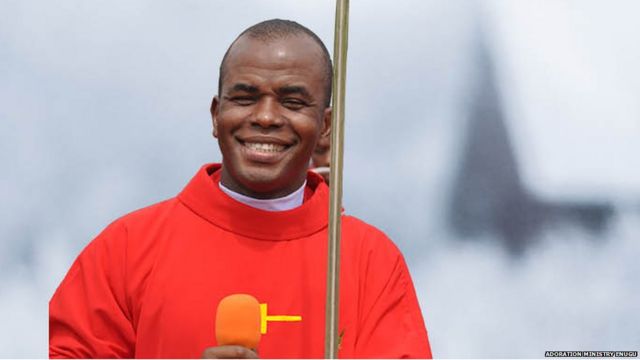 The Department of State Services (DSS) has reported that the zealous man of God, Father Ejike Mbaka is not in its custody.

This follows the disappearance of the Spiritual Director of Adoration Ministries Enugu yesterday.

On Wednesday afternoon, protests erupted in Enugu over the suspected “disappearance” of Mbaka, who was last seen on Tuesday evening.

The situation sparked outrage in the coal-city, with youths issuing a 48-hour deadline to the federal government to deliver Mbaka.

Reports from suggests that Father Mbaka must have been picked up by security operatives or gunmen after he recently called for the resignation or impeachment of the President over the spiking security challenges.

However, the Nation was told by the DSS Spokesperson, Dr. Peter Afunaya that the fiery cleric was not in their care.

He said “This is not true. Fr Mbaka was not picked up by the DSS. Rev Fr Mbaka is not with the DSS. The DSS did not pick him up, please.”

The presidency revealed that he was threatening Buhari because he had been denied a contract. The priest has now been reported missing by the Ohanaeze Youth Council. Mbaka was last seen on Tuesday, according to the President-General of the OYC, Mazi Okwu Nnabuike, who added that any attempt to locate him had proved futile.