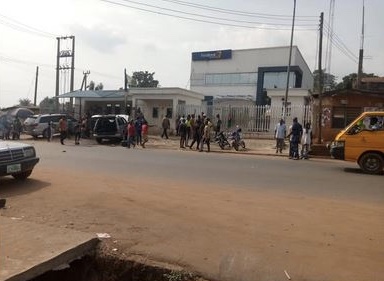 Two Secondary school students were killed in an attack on a bank in Anambra State on Friday, April 15.

On Thursday, an attack was witnessed at a first generation bank branch situated in Ogbunike, in Oyi Local Government area of Anambra State.

During the attack, vehicles were vandalized and set ablaze by the yet to be identified gunmen however two students got hit by stray bullets while they were coming from school.

In the graphic video which was shared on the microblogging platform, one of the students was seen lying on the road with the contents of his head shattered on the floor. The other was spotted helplessly in the arms of a young man who was trying to get immediate medical attention for him.

A video shared online shows one student lying on the road, the contents of his brains splattered on the floor. Another student is seen lying lifeless in the arms of a young man who tries to rush him to a hospital to get help.