Over the years, scientists have put together a list of places that actually exist but cannot be scientifically explained and have called it “THE WONDERS OF THE WORLD”.

However, it seems like this list was compiled too soon as, overtime, more and more jaw-dropping places were soon discovered! 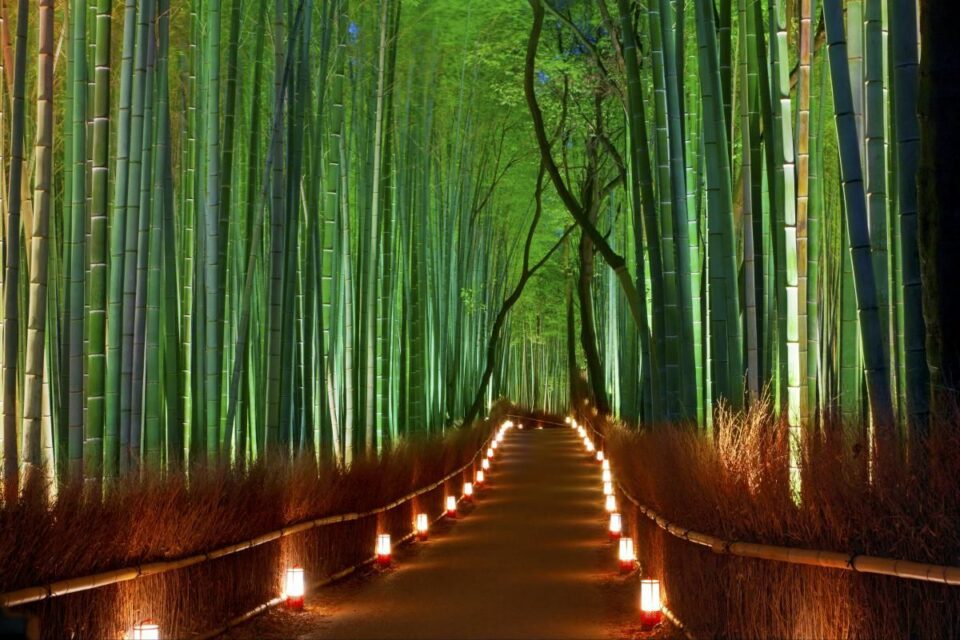 The Sagano Bamboo Forest is situated in the northwest of the Kyoto basin near the Tenry?-ji Temple of Japan. It covers an area of 16 square kilometres, in the temperate regions of the world. The Ministry of Japan considers it a part of the soundscape of Japan. 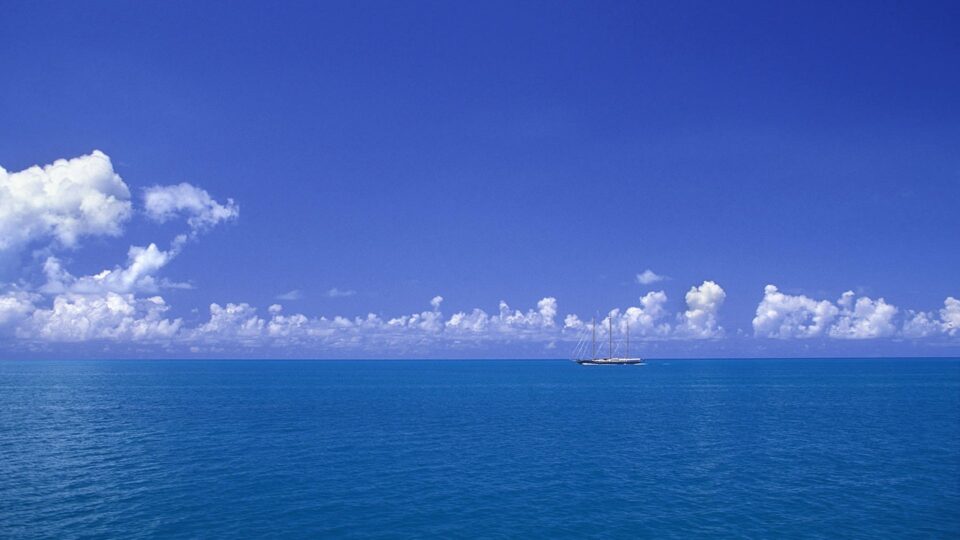 Reputed to be a dangerous part of the ocean, the Bermuda Triangle has earned the notorious name as the ‘Devils Triangle’.

The Bermuda triangle is located off the eastern seaboard of the United States. A number of aircraft and ships are said to have disappeared under mysterious circumstances. 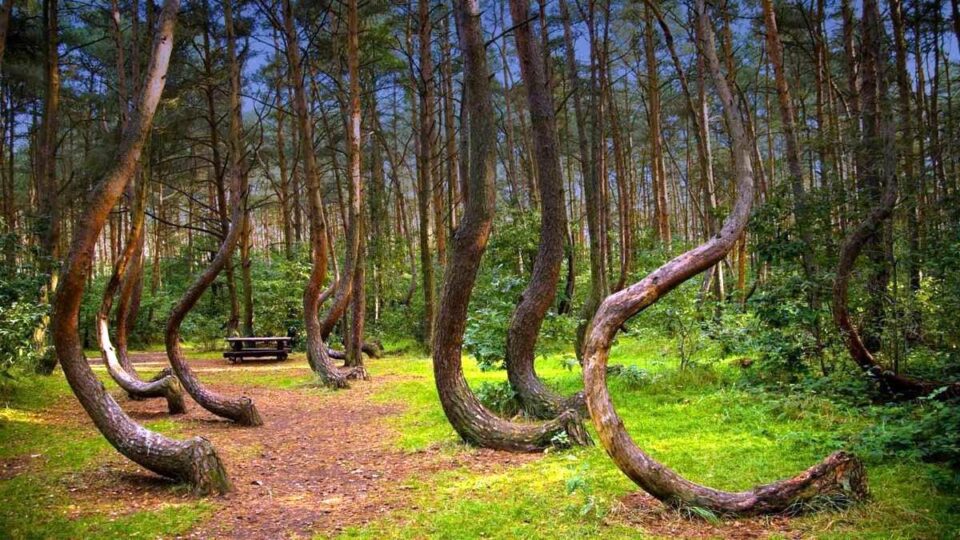 This forest is located in Gryfino, Poland and consists of a grove of an estimated 400 pine trees that are oddly shaped.

It has been speculated that they were planted in the 1930’s when the region was part of Germany and after a while, they bent towards the north for several feet before growing upwards again.

Some theories say it is as a result of human design, some say they were probably subjected to harsh whether at some point. No actual record show the cause for this irregularity, so scientists are left with their own assumptions. 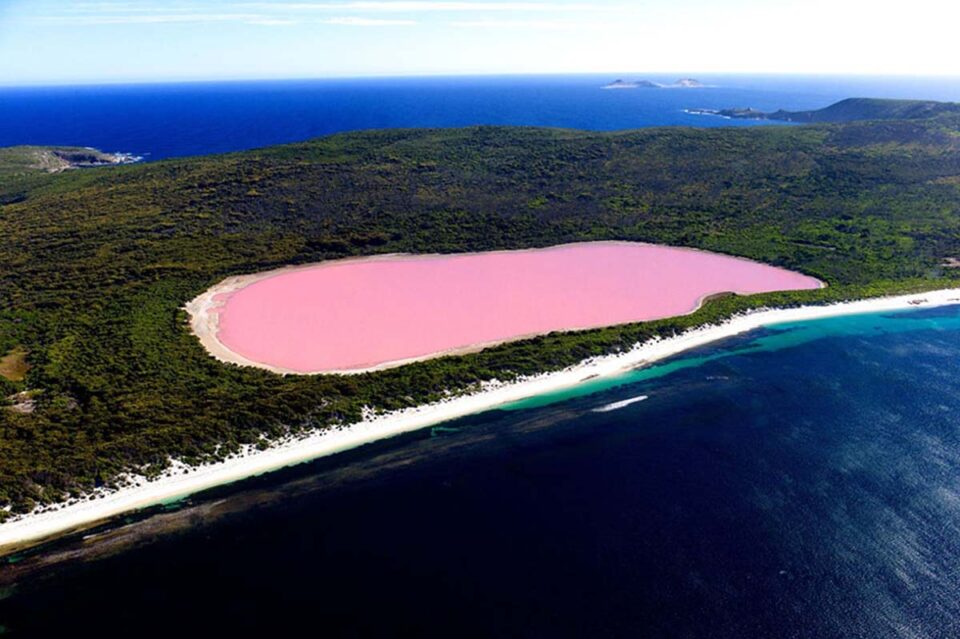 On the Northwest coast of Africa, northeast of the capital Dakar, is a lake known for its pink waters that is caused by Dunaliella Salina, a type of halophile green micro-algae especially found in sea salt fields.

The lake is an important economic center too with thousands of people who rely on retrieving and selling the salt deposits. They also sell fishes caught from this water. 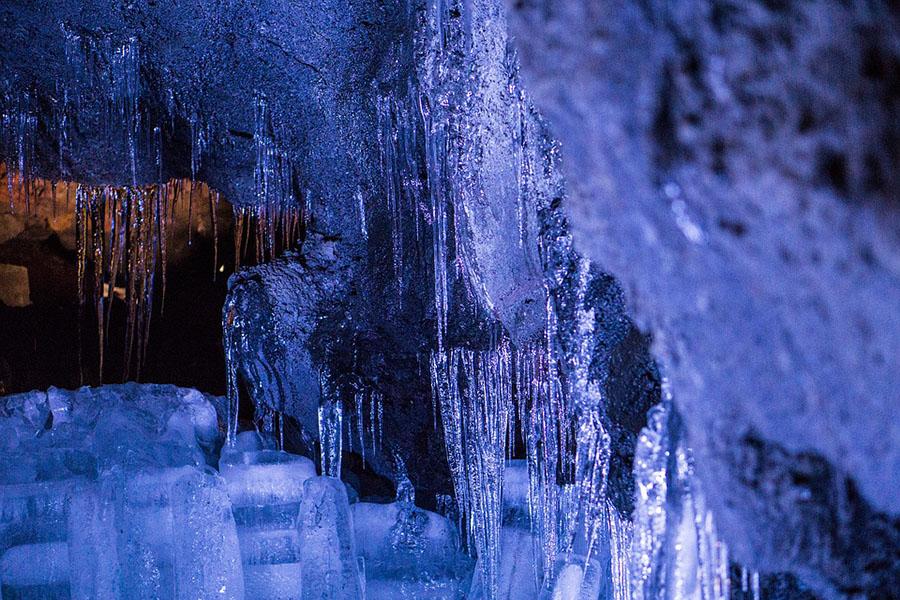 The Naica Mine of the Mexican state of Chihuahua, is a lead, zinc and silver mine that also contains extremely large gypsum crystals. Located in Naica in the municipality of Saucillo, the Naica Mine is owned by Industrias Peñoles, the world’s largest silver producer. 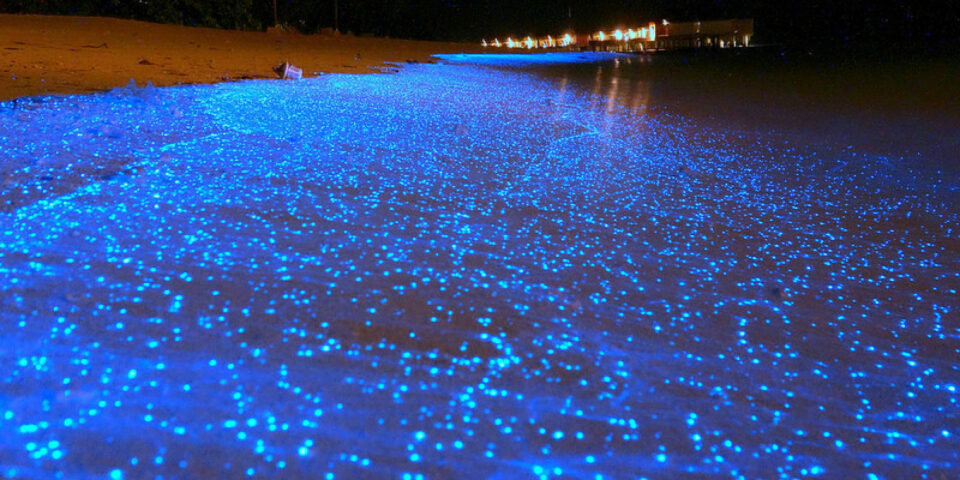 There is a beach in Vaadhoo Island that glows at night. This surreal place has the natural phenomenon called the ‘Bioluminescence’ wherein light is emitted or created by a living organism. 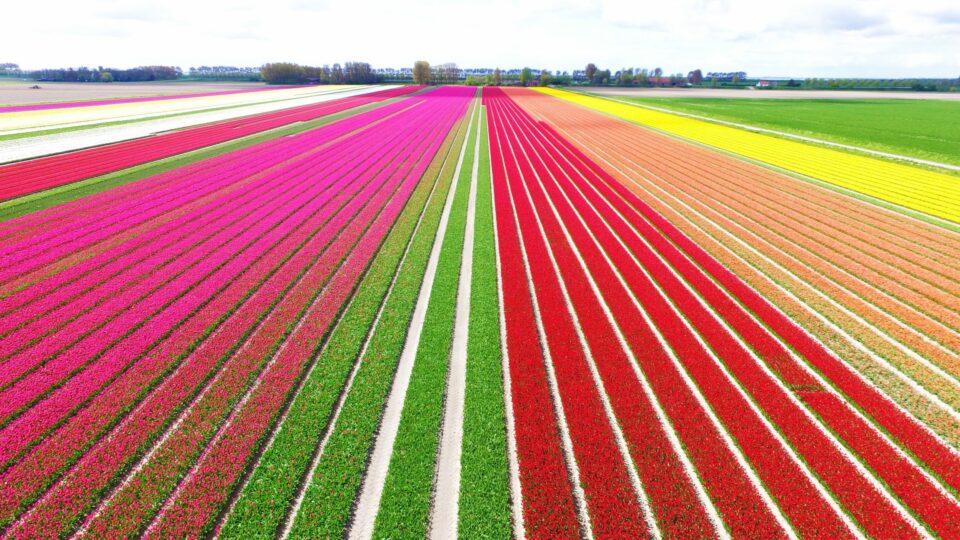 When you think of tulips, you may naturally think about Holland and their famous ‘Tulip Mania’ era during the Dutch Golden Age. The tulip fields in Netherland consist of beautiful flowers carefully arranged in rows, forming a rainbow-like cluster. 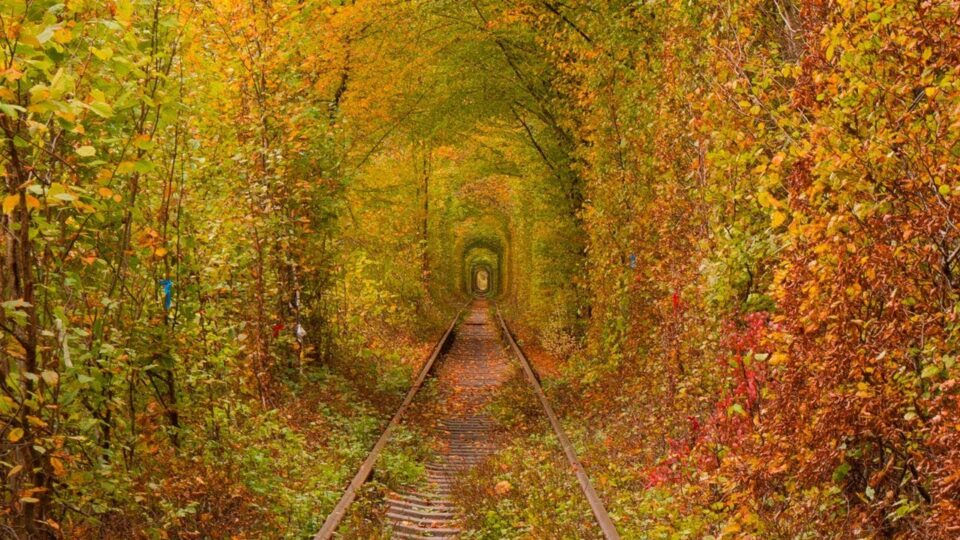 A beautiful tunnel formed by trees and located in a tiny town in the middle of Ukraine is one of the beautiful places you will ever find in the world. It is said to have formed naturally as trees were left to grow freely around the railway, giving room for the passing train to shape it’s way through. By crossing the kleven village back and forth three times a day, the train shaped a close tunnel according to its size.

Some people have also described it as one of the most romantic places in the world as this location is highly popular among lovers. 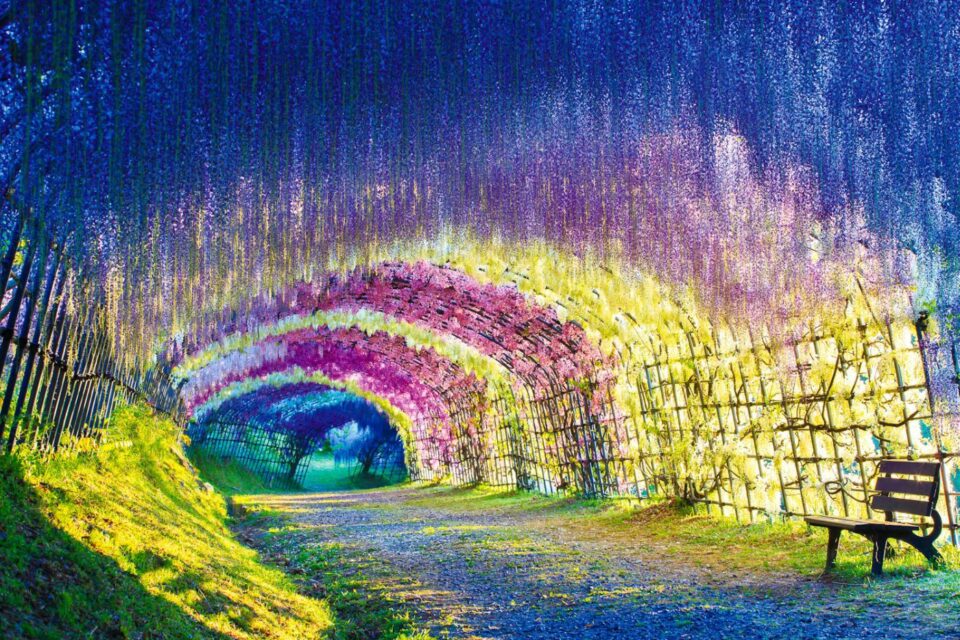 The Kawachi Fuji Gardens, located in Kitakyushu, Japan, embody a seamless blend of architecture and nature.

The garden features 150 Wisteria plants, along with 20 different species, but the tunnel is the crown jewel. People often describe walking under the blanket of blooming Wisterias as a very tranquil experience, which makes sense since this flower is a symbol Buddhists use to represent prayer. 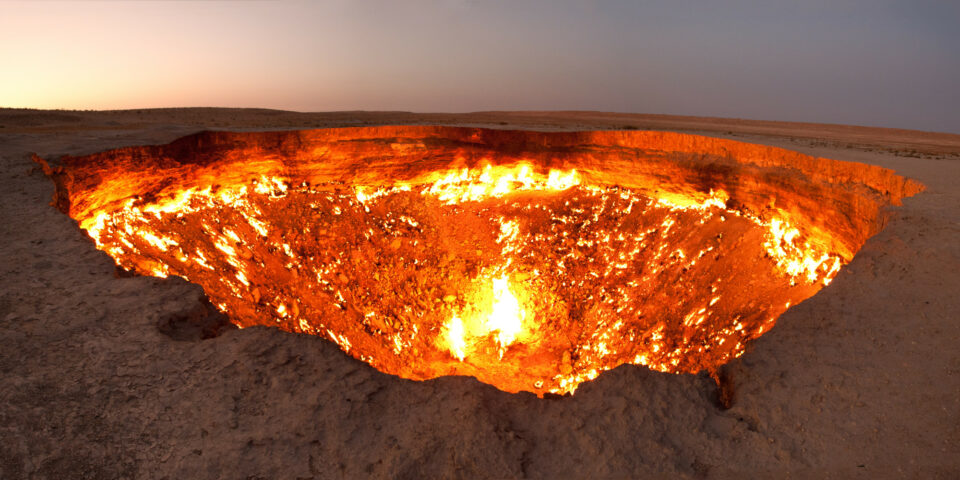 This is a natural gas field collapsed into a cavern in Darvaza, Turkmenistan. It is said that soviet geologists may have intentionally set the area on fire to prevent the spread of methane gas and it has been burning continuously since 1971.

Scientists named the place “door to hell” because of its shape and the large hollow formed on the ground.

Got any other interesting place? Feel free to mention in the comment section.