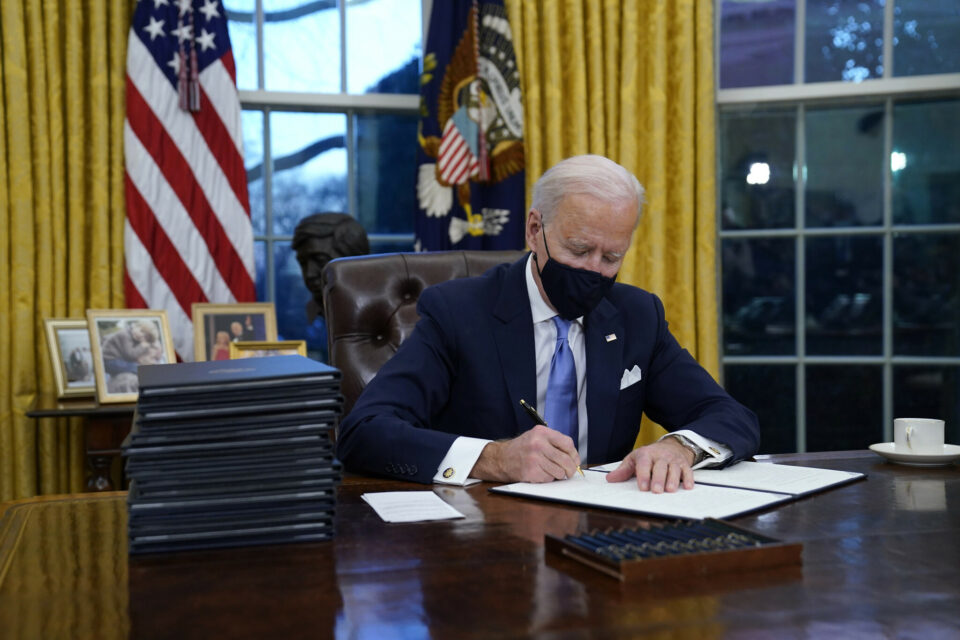 President Joe Biden, after being sworn in as the 46th president of the United States, has signed a series of executive orders from the Oval Office to roll-back the policies of his predecessor, Donald Trump.

Biden says there was “no time to start like today.”

Biden signed three orders on camera for reporters: first creating a mask mandate on federal properties, Biden also installed a coronavirus response coordinator to oversee the White House’s efforts to distribute vaccines and medical supplies, then an order to address underserved communities and create a standard of equality.

Biden also issued executive orders reversing some of former President Donald Trump’s immigration policies, such as halting work on a U.S.-Mexico border wall and lifting a travel ban on people from predominantly Muslim and African countries which includes Nigeria, Libya, Sudan, amongst others. He also ordered his Cabinet to work to keep deportation protections for hundreds of thousands of people brought to the U.S. as children.

The third order rejoins the Paris climate accord, fulfilling a campaign pledge. The move undoes the U.S. withdrawal ordered by predecessor Donald Trump, who belittled the science behind climate efforts, loosened regulations on heat-trapping oil, gas and coal emissions, and spurred oil and gas leasing in pristine Arctic tundra and other wilderness.

The Paris accord commits 195 countries and other signatories to come up with a goal to reduce carbon pollution and monitor and report their fossil fuel emissions. The United States is the world’s No. 2 carbon emitter after China.