Movie Review: Funke Akindele’s ‘Omo Ghetto: The Saga’ Is Everything And More! 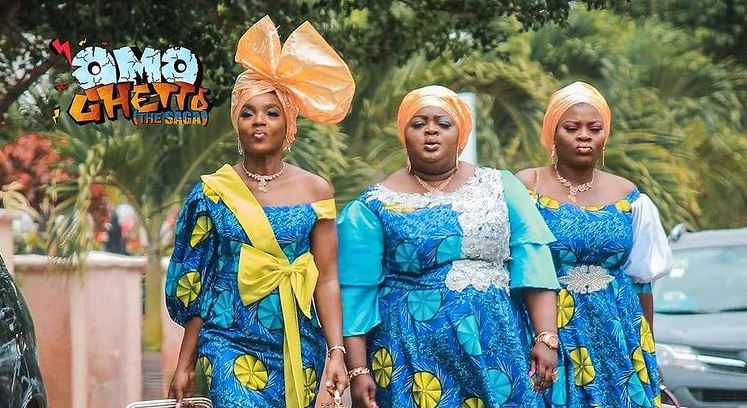 We finally got to see Funke Akindele’s ‘Omo Ghetto: The Saga’ and it was everything the trailer promised!

P.S: Watch out for Chioma Akpotha! That lady took her acting skills to another level! I dare say I have never seen her like that!

Action packed and full of explicits, the movie showcases the rather crazy, jagged and rough side of the jungle that is unfortunately Lagos, Nigeria.

Full of gang clashes, dope selling, yahoo-yahoo (fraud) and loads of bottle breaking, ‘Omo Ghetto’ was somehow spun into a love gone sour story. The movie did not disappoint with its loud, rambunctious and original music.

Produced by Funke Akindele-Bello and JJC Skillz, ‘Omo Ghetto’ tells the story of Lefty (Funke Akindele) and her crew Nikky (Bimbo Thomas), Chummy Choko (Chioma Akpotha) and Busty (Eniola Badmus) who grew up in the ghetto as best pals but were always getting into trouble.

Lefty gets adopted alongside her twin, Ayomide (also played by Funke Akindele) by the rich and affluent Mrs. Benson and moves to an elite neighborhood.

But things go downhill from there! Despite the new living conditions, Lefty cannot leave ‘Askamaya’ alone!

A post shared by OMO GHETTO (THE SAGA) (@omoghettothesaga)

She remains the leader of an unconventional notorious female gang, “Askamaya Bees”, even after moving into affluence. Her daring and uncouth manners put her out of place in her mother’s high-class circles but she couldn’t care less. After all, she is very welcome and highly revered in Askamaya.

Eventually, she gets into trouble with the Police and faces betrayal from her supposed ghetto lover.

Funke Akindele’s double role interpretation in this movie would make you fall in love with her all over again; seeing the switch from ‘ghetto to elite’ mode.

Usually, all star movies end up flopping with “over sabi skills” but this time, everybody killed their roles!

Her use of body language and personality was everything. For the first time ever, the fight scenes were so real, you would shed a tear at the attention to details! (We’re so proud!)

Let’s not forget the mixture of ‘Yorubawood’ and their Igbo counterparts who brought this movie to life with their adages and innuendos.

A post shared by OMO GHETTO (THE SAGA) (@omoghettothesaga)

If you want to lift your mood this weekend or just need a good laugh, please go see ‘Omo Ghetto: The Saga’.